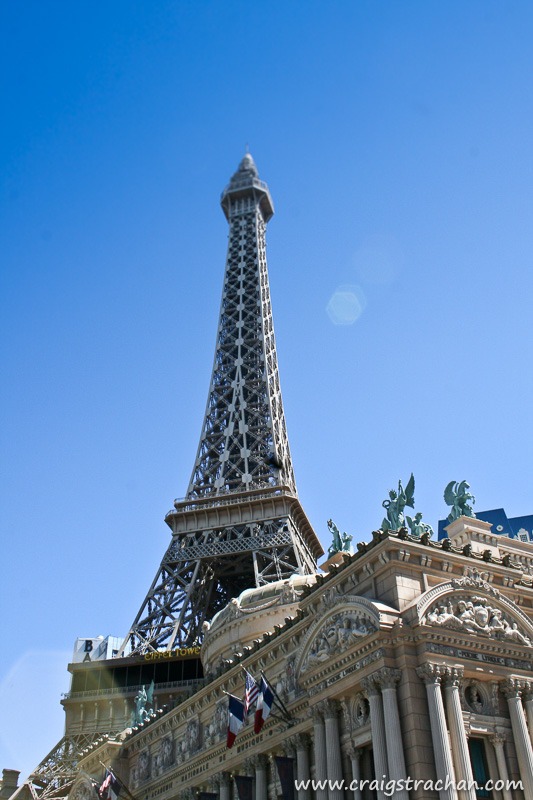 Today we went up the Eiffel Tower in the Paris Hotel. The tower is a 1/4 side scale model, but almost as impressive as the real thing. You get a great view of the strip from the top – it is about 20 stories or so high.

The Paris Hotel is really impressive – filled with little sidewalk cafe’s and Parisian architecture and landmarks and architecture.

We had a drama in the lift when a woman collapsed, but the hotel handled it quickly and I did not have to practise my first aid skills, but it was still a scary experience. My first thought was ‘what about liability?’. If I get involved – not how can I help her? It was quite a panicky situation, but it all ended well.

We went to the M&M shop, which is three floors of M&M (smarties) merchandise, everything from shirts & caps to cushions, games (they had a M&M monopoly set), and an entire floor of just M&M’s. This is where we bought most of our gifts.The shop is a scary combination – kids and candy!

We had a Mexican supper at the Treasure Island Hotel – great restaurant – first restaurant to serve reasonable sized meals. Most places serve HUGE portions, but here they were perfect. They served a free plate of home made plain nachos with three dipping sauces for free (note: many restaurants in Nevada and Arizona seem to do this). They were home made and very yummy. We asked for an extra hot chilli sauce, and we found one that was scary – but we made a good dent in it none the less!

BTW: at most fast food joints you can buy 4oz cokes, which is over 1 litre, and people do.

Finally, just got back from New York New York hotel, listening to live rock (ok no surprises there) – heard a great band. It was them or the country band, so on arguments there. We have now heard two country bands which both do both kinds of music – country and western! The hotel is an authentic representation of the New York skyline – complete with Status of Liberty and Empire State Building. All in all we got to hear about 7 bands on our trip.

All of the hotels are next to each other – but the distances are deceptively far, so I have sore legs, and Lois has sore feet!