My journey to Athens Marathon started in 2015 when my wife Lois and I visited Athens on holiday. We visited the Panathenaic Stadium (site of the ancient Athenian Games and the first modern Olympic Games – 1896), and the track was open so of course I ran a couple of laps. 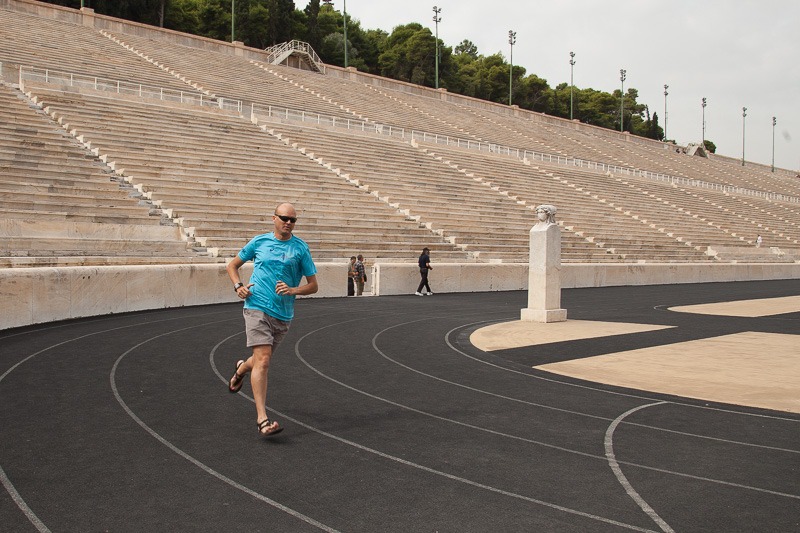 The gift shop had marathon shirts on sale, and you know the rule – you don’t wear the shirt if you haven’t done the race. That planted the seeds, so in 2017 we decided to go back so I could run the race and of course wear the shirt. The conversation with Lois went something like this:

Me: Would you like to spend your birthday in Athens? (her birthday was 2 days after the race)
Lois: Absolutely!
Me: Great, and while I’m there I’ll run the marathon. 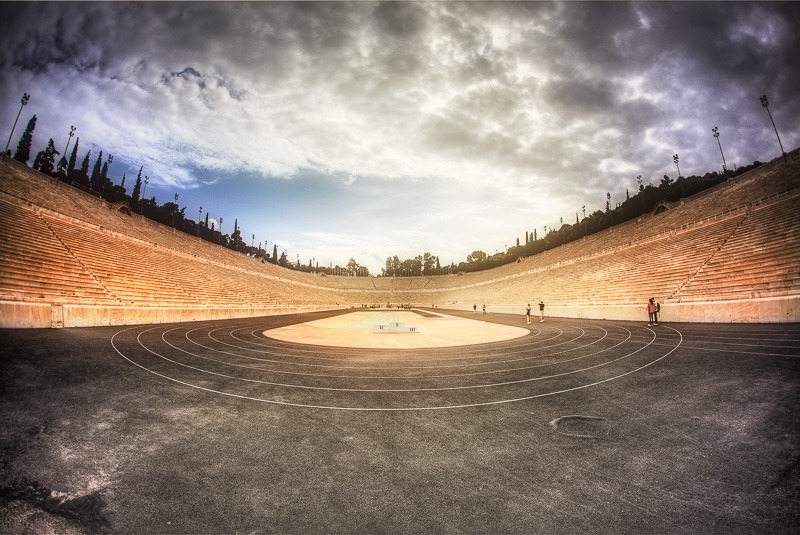 The marathon has its roots in the Battle of Marathon in 490 BC, after which Pheidippides allegedly ran to Athens to announce the victory of the Athenians against the Persians, after which he collapsed and died. To be fair this is after he ran to Sparta and back – a distance of about 450km.

Athens marathon is a point to point race, starting in Marathon (yes Marathon is a town) and running pretty much directly to Athens (there is a small detour to run around the marathon battle tomb near the start). While the race started at 9am, I needed to be at the bus station at 6am on 12 November to catch a free bus to the start line. Just about all 14000 athletes are bussed to the start, so I am sure that just about every bus in Athens was used. 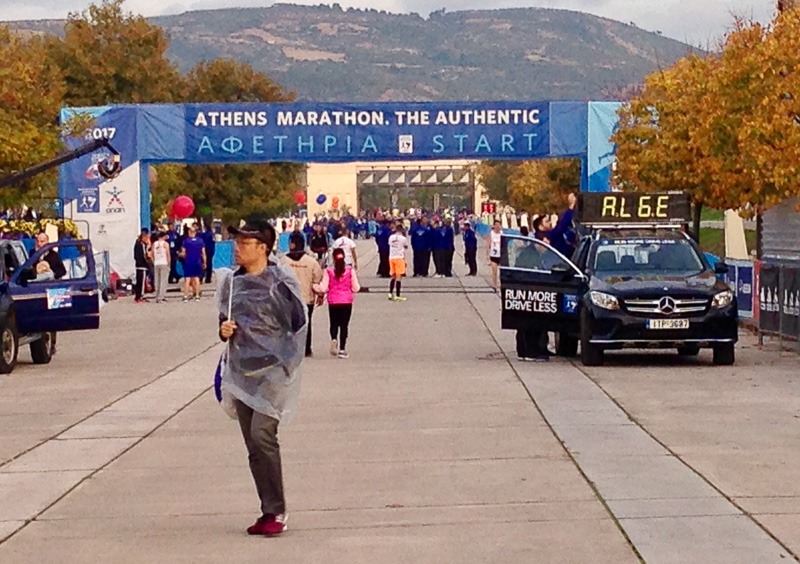 The event was extremely well organised; when I got to the bus station I had to wait for about 5 minutes before a bus arrived, and when we got to the start line there were hundreds of toilets, free bottled water and free plastic ponchos to keep warm. Likewise the finish was a production line; you finished, got photographed, were handed a medal and shuttled out of the stadium where you got a space blanket if you wanted, as well as a goodie bag with some food and water in it.

Start area with the hundreds of toilets

DHL handled tog-bags and each race number had its own tog-bag truck (eg number 10000-11000 were truck A etc). You had to use the bag provided at the expo. Speaking of the expo it was much like a Two Oceans expo selling the usual running gear. They did however give me a free travel card for my stay in Athens as part of my registration – a small but nice touch. The start line is a permanent start line, as are the route markers to Athens. 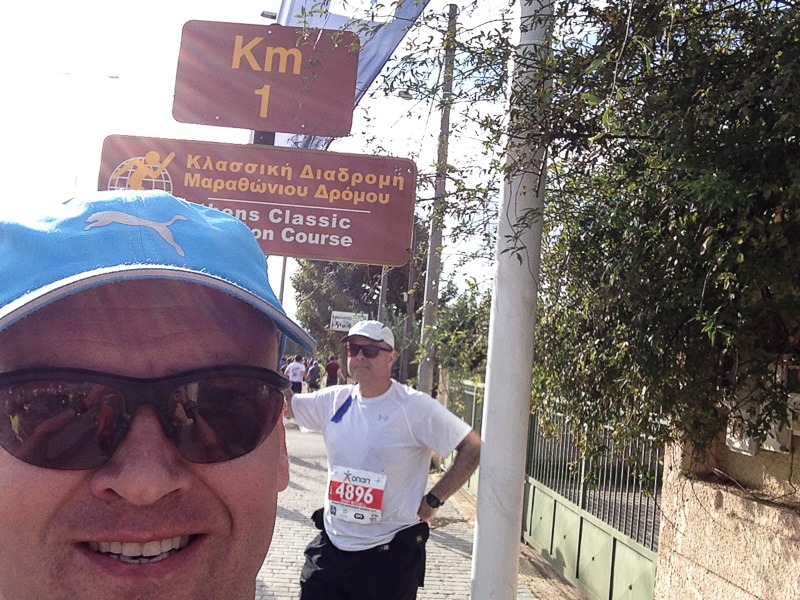 41,2 km to go; these signboards are permanent – every km

The start is staggered which is much nicer than in SA; there was no congestion, there was loads of space in the start pens, and nobody was shoving or trying to get to the front. Likewise you were timed both gun to mat and mat to mat (gun timing is for your start pen). The downside of this is there were no pacesetters; I am not sure how you would manage pacesetting with this type of start – in total there were 12 starting groups spread over about 40 minutes. The other big difference is there were LOTS of headphones, I estimate at least 25% of the crowd were wearing headphones.

The race starts on a rural route (Marathon is a very small town), with farms and fields on the side, interspersed with small villages. Near the start there were children at the side of the road handing out olive branches to the runners (a sign of peace).

The villages are so small that many of them still have town PA systems on the street light poles, all of which were playing Greek music, and I saw a lot of Greek dancing and costumes. There were even a few barefoot Greek warriors running the race complete with swords and shields. 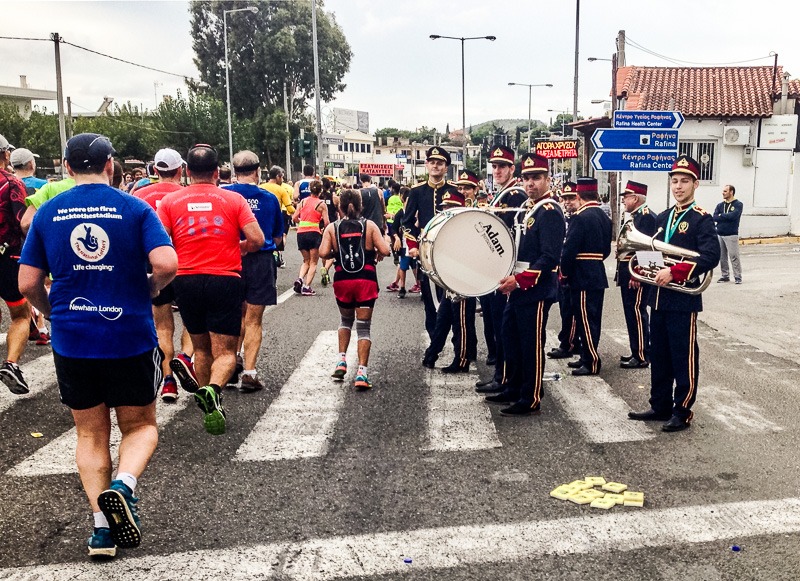 Some of the entertainment

There was loads of crowd support as you ran through the small towns, I traded at least 1000 high fives with the kids, there were lots of bravos being shouted, and live music and dancing. but as soon as you left the villages it was suddenly quiet and introspective. 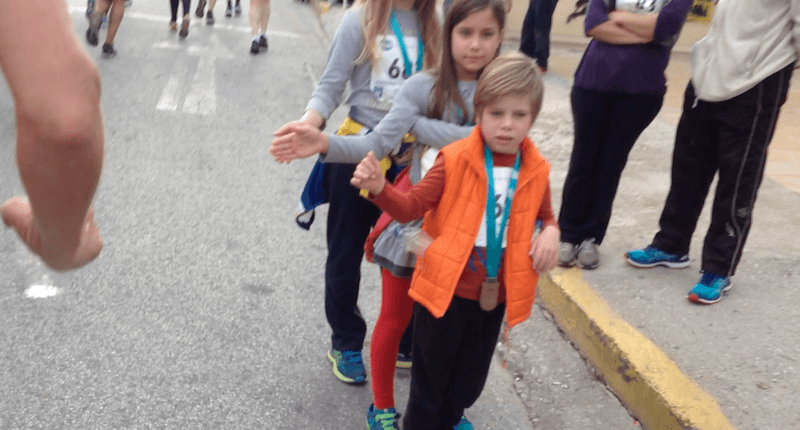 High Five! There was a kids fun run earlier in the day; hence the race numbers and medals

The route was hillier than expected. Even though the total climb is only 400m, the main hill is a gently yet long and energy-sapping 13km climb, starting around the 18k mark. I was relieved to get to the top of that hill (give me Chappies any day). 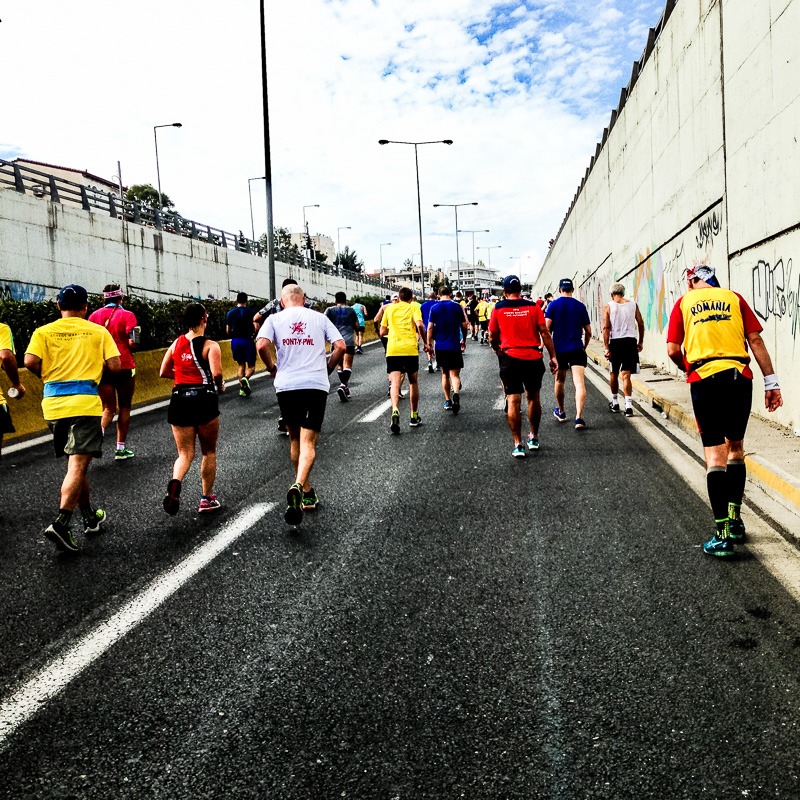 At the end of the 13k hill; I was so glad to crest this climb

I was exceptionally lucky with the weather; we had thunderstorms both the day before and the day after, but race day was slightly overcast with a lovely cooling breeze blowing off the Aegean Sea. It was perfect running weather. 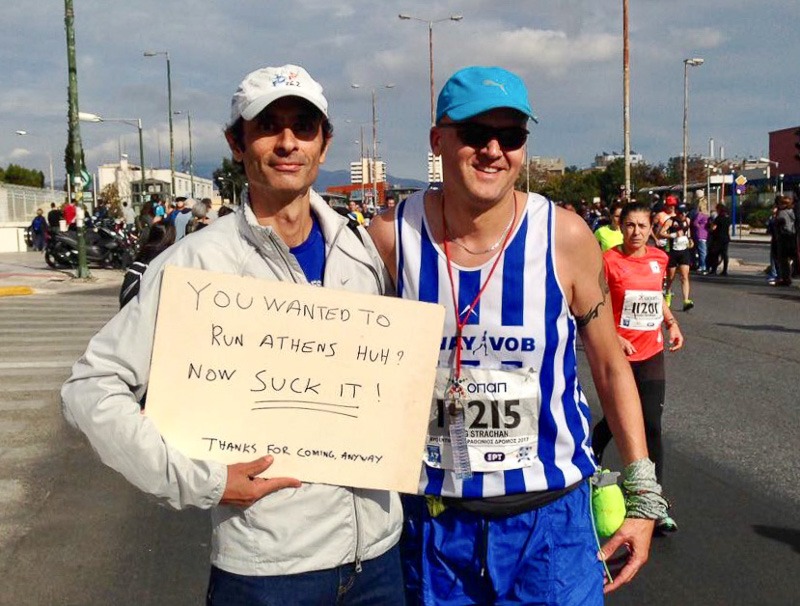 First aid was offered every km, and I noticed a lot of runners dropping off in the early stages of the race (some even near the beginning); I suspect that there were many less-experienced runners that underestimated the distance, and I’m sure the generous 8 hour cutoff plays a role. I don’t see that many dropouts at home; maybe our club system is better at getting runners ready for the marathon distance. 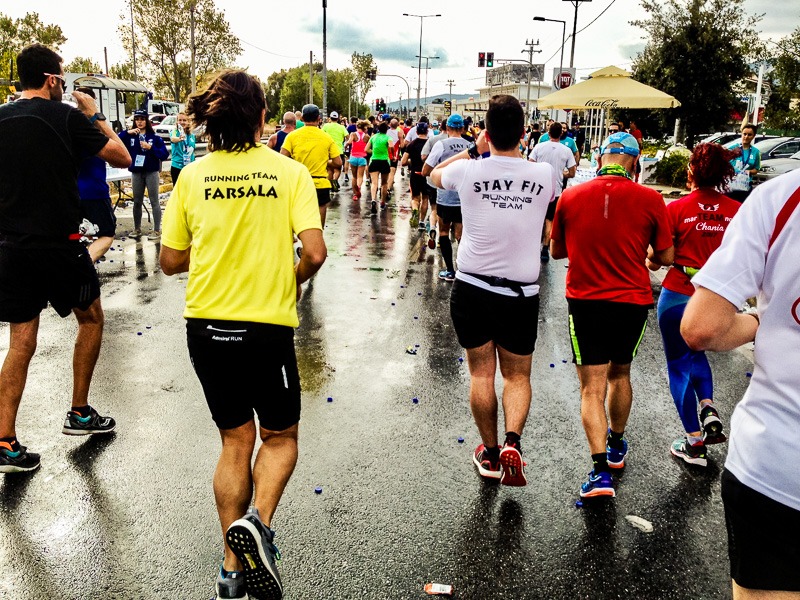 There were plenty of aid stations where you are handed 500ml bottles of water, sponges, gu’s, bananas and nut bars. The water was wasteful since you don’t need that much, and thousands of half-full bottles were tossed on the ground (as a Capetonian this felt so wrong). The road at the aid stations was covered in water from this waste. But 2 days later when I drove the route there was not a single piece of litter on the ground. 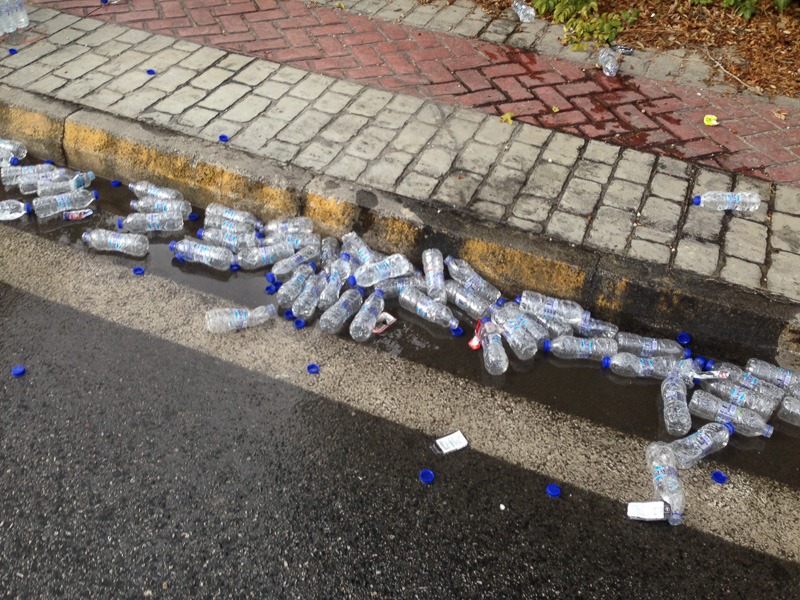 Litter at a water tables, it was quickly cleared up

However there were no “unofficial” aid stations. In Cape Town the supporters are amazing with handing out potatoes, chips, marshmallows etc. There was none of that. I don’t know why, but I suspect (without any research) it is due to EU being strict about everything, and I bet its illegal or possibly liable to give food to strangers. I saw a few runners from South Africa, and at one stage I heard somebody shout “Go VOB”, and I turned to see somebody waving an SA flag. 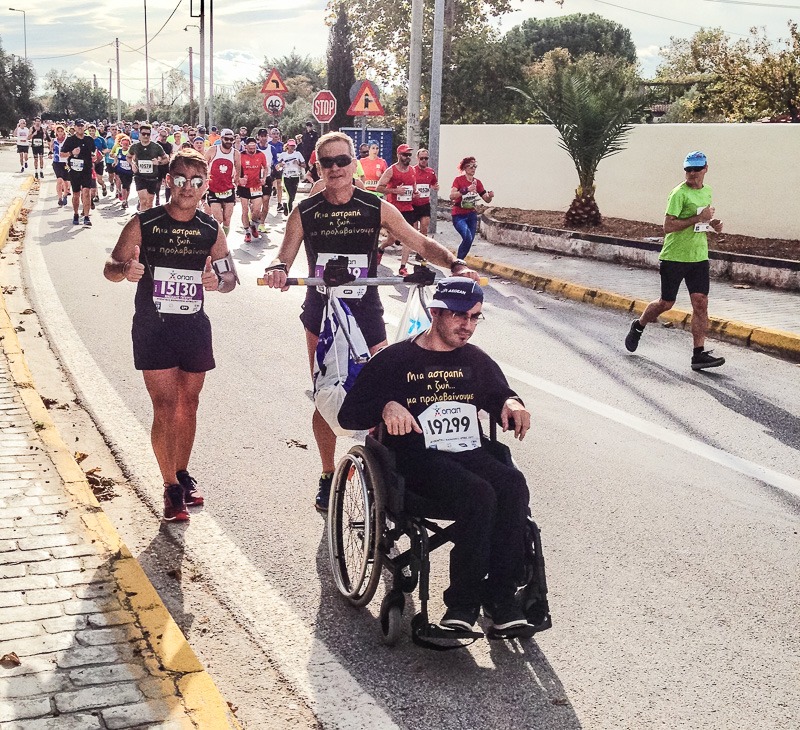 At one stage a dog joined the run, and he ran with us for about 5km before losing interest. I saw a few disabled athletes, both “racing” and “normal” wheel chairs, and 1 wheelchair even had a dog sitting on the front. 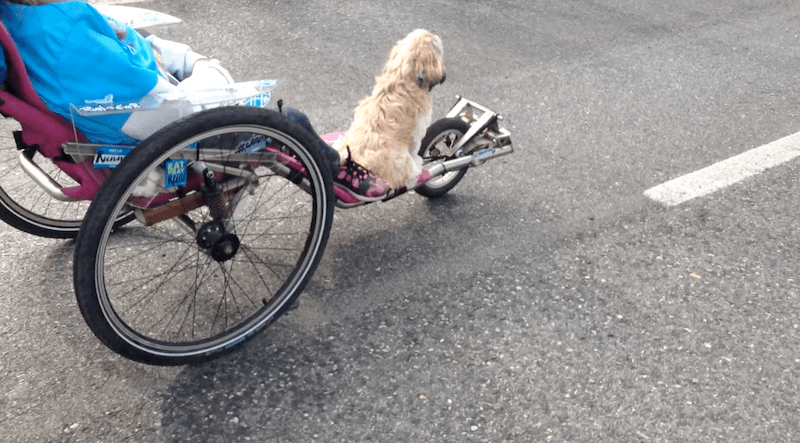 The best part of the race was the last km; it was a long downhill run to the finish in the middle of town, and it was surrounded by screaming crowds. I felt like I was the frontrunner about to win the race. The crowd support was like the finish line crowds at Two Oceans Marathon, but for a whole kilometre, it was absolutely somewhat emotional running to the finish on the same track as the first modern marathon, and the same location where athletics has been performed for over 2300 years. 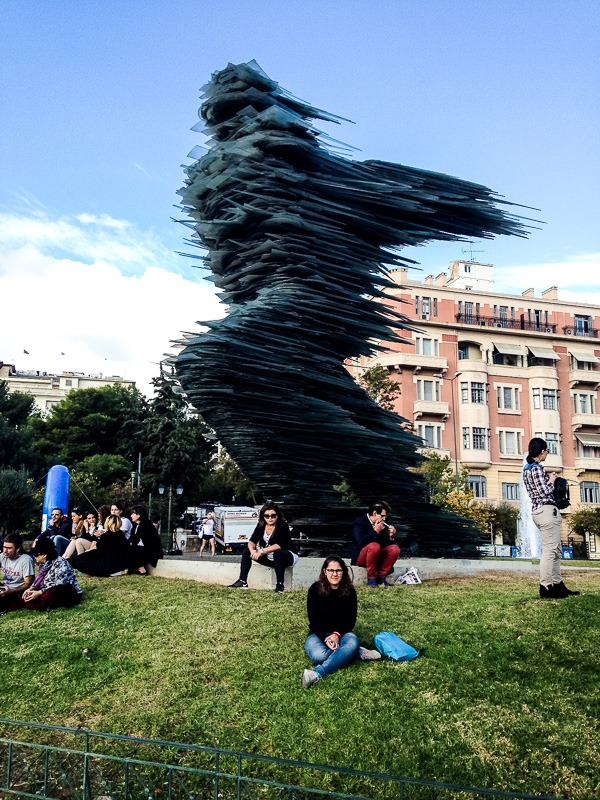 The glass running man sculpture in Athens; about 5k from the end

Finally when I spent a few days after the race walking around Athens, I saw loads of athletes wearing their medals. I’ve never seen that at home. Here you put your medal away and think about the next race. 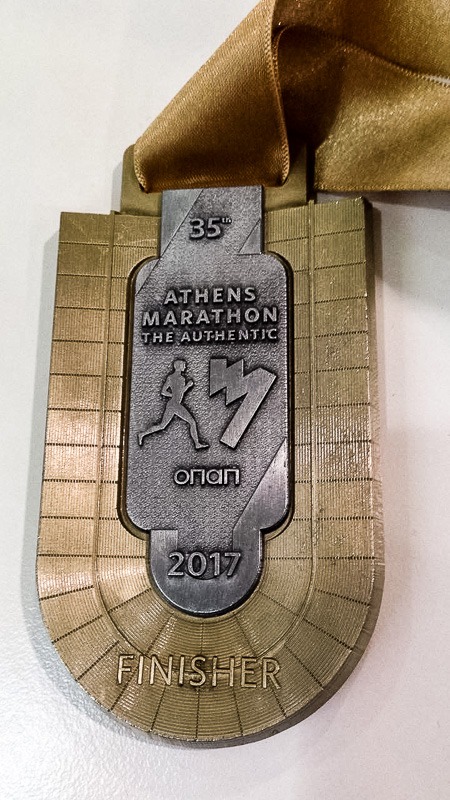 I was happy with my pacing (thanks Rassie), I had to dig deep to keep moving but considering all the photo and video stops I was really happy with my respectable 4:36 time.

This was my first overseas marathon, and it was a fantastic experience. If you’re considering an overseas marathon this is a great one to pick. Its historic, exceptionally well organised, easy to register for, and of course you can spend a few days after the  race enjoying the food and culture of Athens. 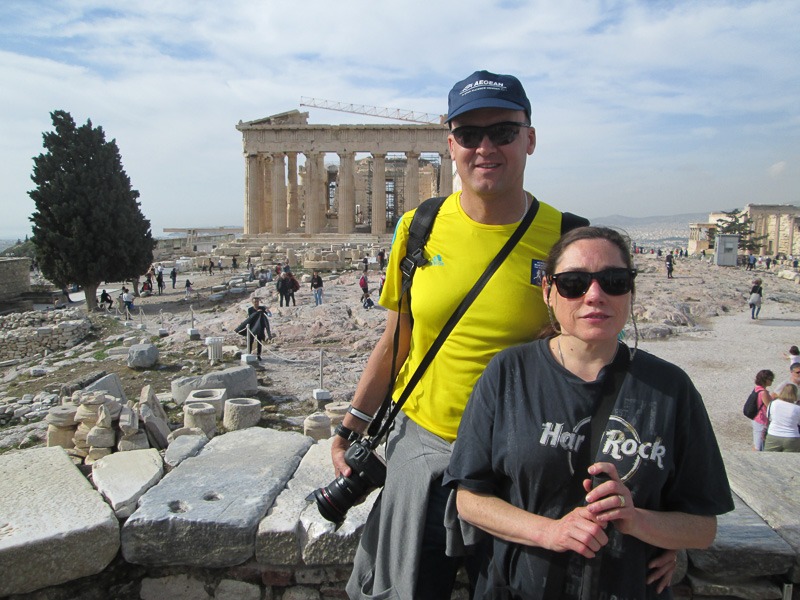 Keeping my promise; climbing the Acropolis for Lois’ Birthday 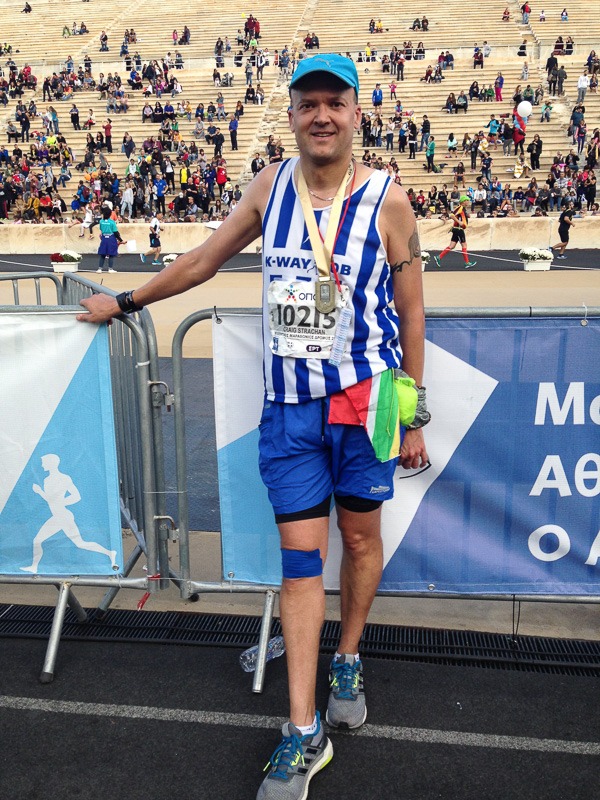