An Italian busker entertains us in the streets of Rome. 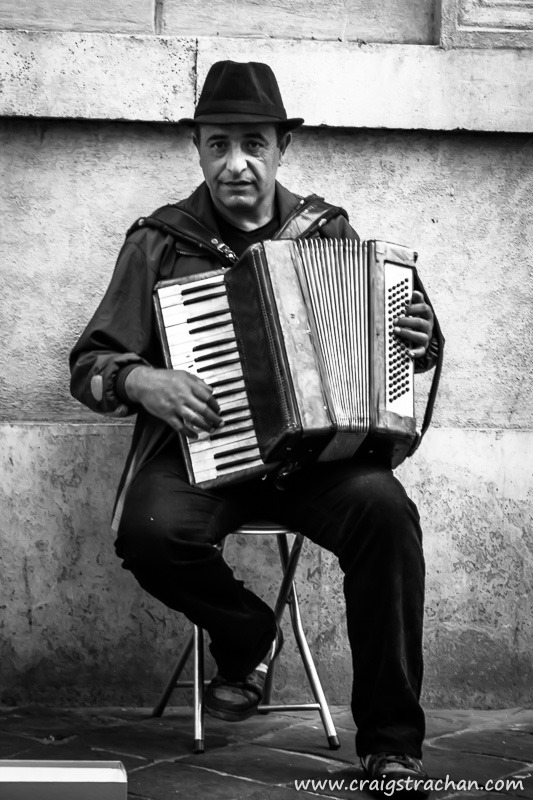 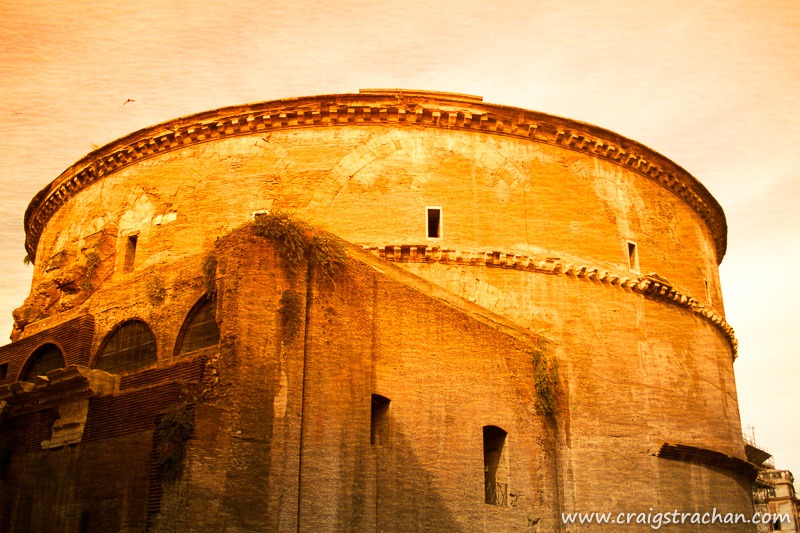 The Pantheon is a remarkable building. It was completed by the Emperor Hadrian around 126AD, and has been in continues use ever since.

The dome starts at about 6m thick, and narrow to about 1.5m at the top (that’s 4535 metric tons). The dome is 43m in diameter and staggering to look up at. It is a remarkable piece of engineering, especially considering that it was build almost 2000 years ago. 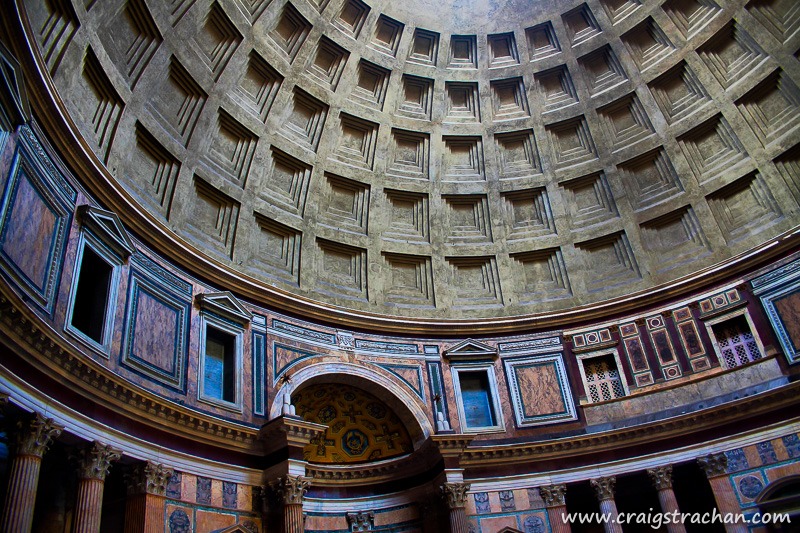 The Arch of Septimius Severus marks the entrance to the forum in Rome. Completed in AD 203, it is an impressive arch to stand under.

I have been reprocessing some of my Rome photos, probably because I am excited about my upcoming Spanish trip, so I hope you are enjoying them! 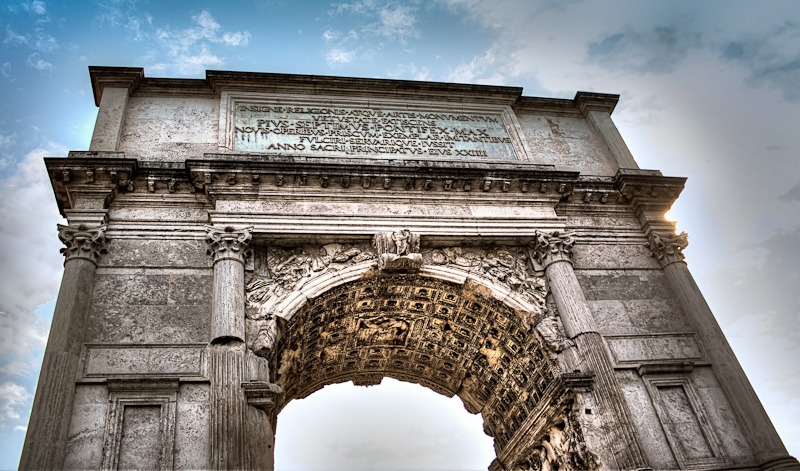 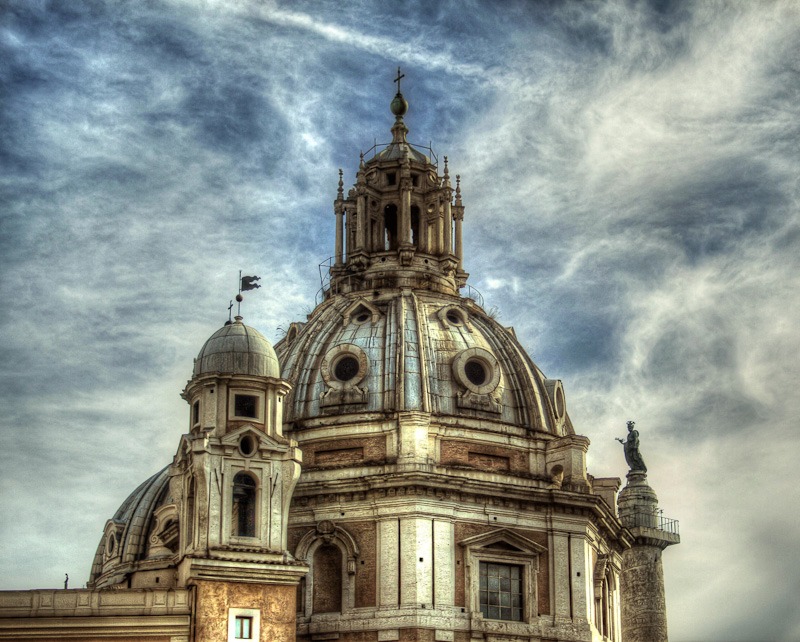 I love the old buildings in Europe, especially the Churches with such care put into the lovely architecture.

I don’t know which church this it (if you know please let me know), but it is somewhere on the bus route between the station and Vatican City in Rome (no it is not the Basilica). I particularity love the marble-like clouds framing the dome of the church.

Update: Thanks to Cristina for telling me about the church, it is the Santa Maria di Loreto, built in the 16th century.

Now that we are finally home and (mostly) recovered from our trip, I have managed to get my photos in order, so the next couple of posts are going to be a catch up of the trip. Starting with some of the hotels on the “strip”.

The Strip, or more correctly Las Vegas Boulevard is the main drag in Vegas where everything happens. If you stay in Vegas, you should try to stay on or really close to the strip. Most of the hotels are on the strip, and certainly the big theme hotels are there.

Here are just some of the hotels that I passed on a couple of walks. 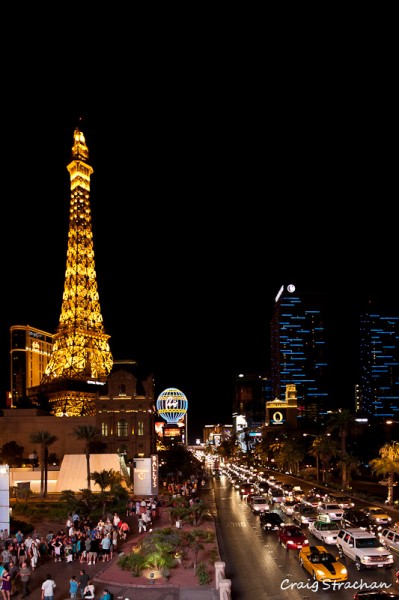 Starting with Paris, which contains a scale model of the Eiffel Tower which is approx 1/4 the full height, which is still several stories high. There is a viewing deck on the top level which provides great views of Vegas. Note the traffic at about 10pm on a Sunday night. 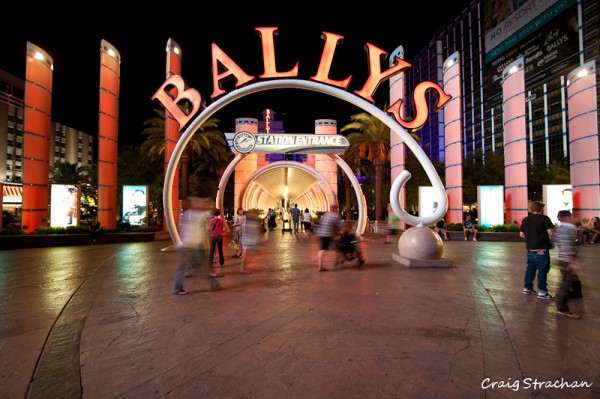 Next up is Bally’s, where we stayed. Bally’s is connected to Paris by a short walkway containing a few shops and restaurants. At about $40 per night, Bally’s is one of the cheaper hotels on the strip, but you pay for everything, including $3 per day for the honour of using the hotel safe. But still good value for Vegas. 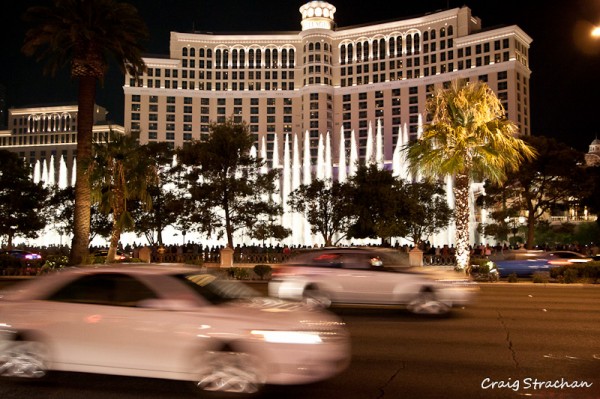 The Bellagio is across the road from Bally’s, and it contains the famous water fountains, which play in time to music every 1/2 hour or so. The fountains, which shoot higher that the hotel are pretty impressive to watch. 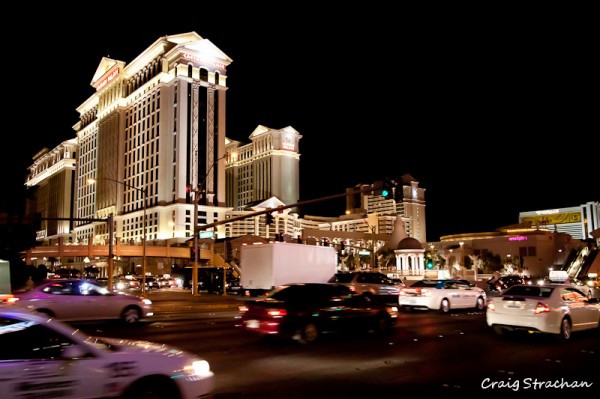 Further down is Caesers palace, which is built to look like ancient Rome, complete with a Colosseum and Pantheon, and “Forum Shops”. 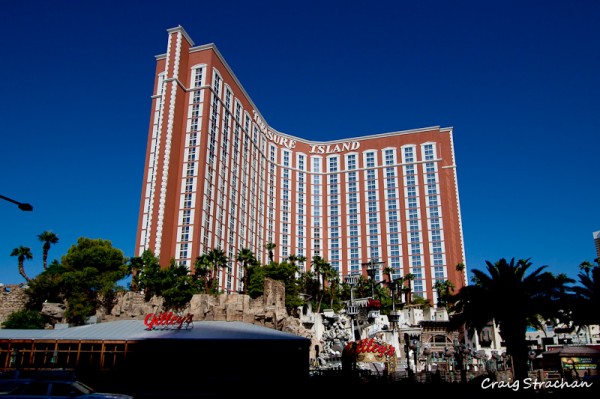 Treasure Island is home to regular evening ship battles as the “Sirens of TI…lure a band of renegade pirates into their cove with powerful and captivating melodies”. The show is a little cheesy, but well it is free. 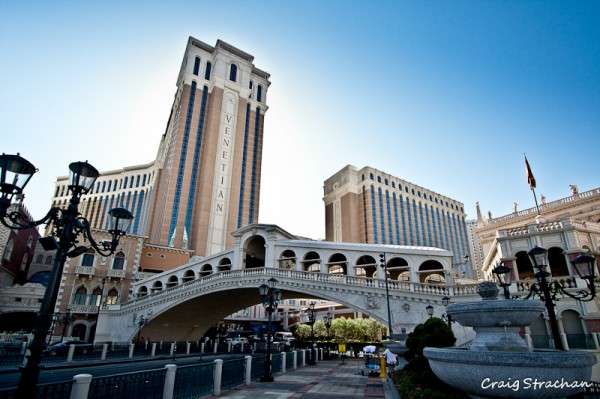 Last on my list is the Venetian hotel, home to the Blue Man Group, one of my top shows. The entire hotel looks like Venice, complete with St Mark’s Square, the Rialto Bridge,  and gondola rides. 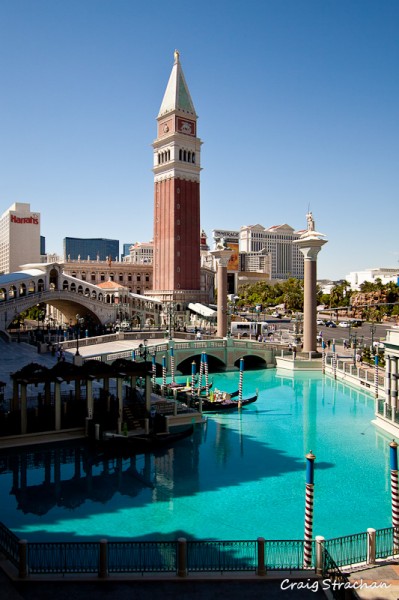 Having being in Venice about a year ago, it was remarkable how similar this hotel is to the real thing. Notice how the docking poles are even a little bent, as if they had been in the Grand Canal for a long time.

This is just a selection of the hotels, but you can easily spend day walking around just looking at the hotels.